When WORDS get MURDERED

Let’s not deny it. You and I both have committed multiple murders recently and we are going to continue to judiciously murder in the future too. What murder is this, do you ask? Don’t be shocked. Luckily we won’t be sent to prison for this kind of murder. I’m talking about a crime, which falls under the section of “defamation of words”. Yes, with the advent of SMS, chat rooms and text messages, we all have victimised the English Language by murdering its basic word-structure. If you are still not getting me, just get your smart phone or any other mobile device that you use and open your inbox. In the recent conversations there is a 99% chance that you are bound to find, if not all, but at least a few of the following words that would have been typed in short-form to make them look like this: 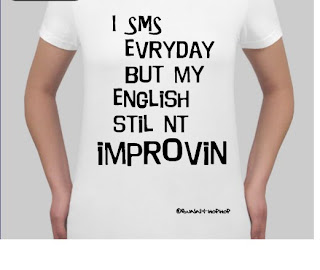 And the list goes on. This is a serious crime you know. Over the last ten to fifteen years, we have become so accustomed to the “easy and short” usage of commonly used words in daily life that it has become more of a bad habit now a days. Short words are fine to use, when we are in a hurry to send a message to a friend as fast as possible. At times like that, short lingo is enough to make the communication. But that doesn’t mean they should be cultivated to be used on daily basis, especially on formal occasions. Now there has come a point where people forget the line between a formal and an informal letter.

Consider an average, short-lingo addict who is typing a very formal letter to an associate. And this is how it goes;

There is definitely nothing formal about this formal letter. The excessive usage of short-lingo is slowly deteriorating our brain from using the actual English words that are classy, wholesome to pronounce, to speak and to see.

I know SMS language is the all new “it” language that people, especially the teens and young adults are flaunting now a days. But studies show that if this type of sub-culture continues, the short form might as well be adapted as the revised English language with the future generations.

English is often called as a mad man’s language because, there are words that sound the same but mean different like “hare” and “hair”. Then there are words that sound something and are spelled with completely different letters like the words “tough” and “through” where the “gh” is merely there for no reason. So no language is perfect. Even English is perfectly flawed. But it has been built and well organised over the past generations. There are many words that come under this language that define subtlety and sophistication. English language is a classic, universal language. But times are changing and so is the usage of English words. In my opinion, people are becoming lazy to type the whole word. Instead they are resorting to the SMS culture even for formal occasions.

This is mainly affecting the children’s Basic English knowledge. There are cases where students often forget while writing long answers and resort to using short-form words such as “r for are”, “u for you” and "bcoz for because". Maybe short-lingo is a popular culture out in the modern society but they are definitely formidable to be used when one is expected to actually write on a sheet of paper.

Even I have done such horrible mistakes while writing letters and even during class internals. And this is mainly because of the constant texting and chatting with friends on the internet. That is why I started blogging. So that at least in my posts I wouldn't resort to the SMS culture. And this has helped me improve over the days. Now a days, even while I text or chat on Facebook, I make sure I type properly. Of course there are times, I feel lazy and use the short-hand version. But that’s okay. As long as I don’t use that form of language in my E-mails, letters and comments, I’m fine with it.

Words mean a lot to me and I hate to see them get stripped off and murdered off their essence like this. So I’m making the following two similar requests:

Please stop hurting the words. Use them fully and completely and if you respect the language, that in turn shows your respect to the person reading it.

Now why don’t you decide which makes more sense to read and to feel? The former or the latter??

P.S: Trust me, you don’t want to forget your grammar like this cat here who texts his pals a lot!! ;)

Would Love to hear your Feed back!!!

Neha
Mysore/Bangalore, Karnataka, India
One fine day, it happened. I opened my eyes and there it was, so close to my reach... answers to my life, solutions to my future and a closure to my past.
And then the damn alarm woke me up!!

Thanks for stopping by!!