I talked to him on the phone for the second time today and at the end of the conversation, I could not stop smiling. Now, that’s a first! There are no hidden agendas behind that smile. Could this mean what I think I might be feeling? Did I just smile because I’m feeling Happy?

Happiness in its purest form...a form that does not expect anything back?
I’m not sure what else I can relate this smile to. Tonight, I’m just Happy I talked with him.

I wonder if he’s feeling the same thing...

I don’t want to think negative at this point. There is nothing to think negatively at this stage. Unless I let that dark door open at the back of my mind and all kinds of crappy thoughts would come and mess up my smile.

I want to save this smile I have on my face. I’m going to be both blind and deaf to anything that has the slightest potential to get in the way and ruin my smile.


Because tonight... I just want to sink into this smile called Happiness.
Posted by Neha at 12:37 AM 2 comments:

Why do we care for people to care? Sometimes, we seek out in hopes of catching a little magic off the feeling of owning something close to our soul... but it is during those times, these feelings tied with hopes, tend to go haywire. Until finally, it would become an enraged obsession.

I was fooling myself. I believed that a new place to start over would put a closure to old chapters, and a new breeze to breathe would definitely pull me out of my long-standing habit of redoing the same mistakes. But I was wrong, yet again. With my new life, I had built a pretty ritualistic routine of being the “uptight workaholic”. Truth be told, it was a mere attempt to train my untamed heart from going for things, not meant for me to get attached.

Three drinks down, I manage to sit up straight on the empty evening terrace, as stars decide to shine on me kindly and I can almost hear their whisper, questioning the reason for my present predilection. I ignore them and look down at my empty glass and to my surprise I can see a tiny circular window at the glass bottom. Its reflecting me that warm summer night I was out on the street with him, walking alongside a person, who even though was righteously honest enough to express his unsure disposition when it came to me, all I could see through the glass, was that dreamy expression on my face, resigned to risk it all, at the cost of getting hurt again.

I jump up on my feet in a heightened rush and smash the glass on the floor and scream out to the stars, “Why didn’t you shine on me your righteous wisdom and save me that night, eh?”

And the stars continued to do what they do best... twinkle away in silence. And I do what I do best every other night... drown myself in some more magic.

P.S: Deeply inspired by the song “Chandelier” by Sia.
P.P.S: Back with a post after a long, long time. More posts will follow, which will continue to unclearly explain what this writer is up to!! 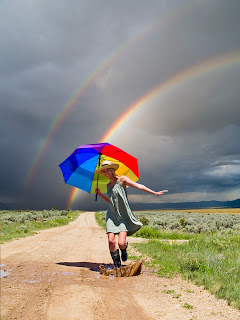 I keep coming back
for a glimpse of lost promise;
Of colourful joy

Eyes keep searching
for that glimmering jewel
Beneath murky clouds

P.S: It's a great pleasure to indulge myself with another Haiku after many months. Haiku writing always transports me back to a time, much cherished by my heart. 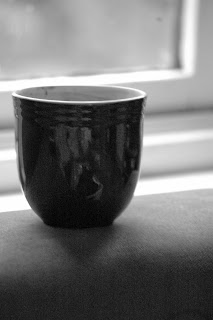 Things happen too fast sometimes. They don’t leave any time to comprehend your actions, the way you intend them to occur, in your subconscious state-of-mind. And in just a blink of an eye, that moment you were hoping for, that tiny spark which has the potential to spread unspeakable amount of warmth within you, something more than what can be witnessed in your deepest dreams, would not only arrive, but also leave you, faster than the speed light. It all happens so fast, you wouldn't even realize the gravity of the situation until much, much later.

One rainy evening brought with it cold droplets, smudging my spectacles and ego. Even before I could grasp the aura of the friendly situation I found myself in that cozy cafe, there I was, sipping my last drop of green tea and heading out of the shop with a bitter taste in my mouth. And with nothing else to say but goodbye, I threw in a light smile at him which didn't really manage to connect all the way to my confused pair of eyes, and my naive self just assumed that the day had ended pretty well. Until much later, when I was back in my roomy territory did I realize that I had actually said goodbye to an entire plausibility of a romantic future.

I can still feel the idea of it all floating far away from me, in the streaming puddles far across the cold, wet street. It’s too far from my reach now, and I feel too safe in my room to go out and pursue it again.
Posted by Neha at 11:46 PM 2 comments:

The Pride of Mysore Zoo. 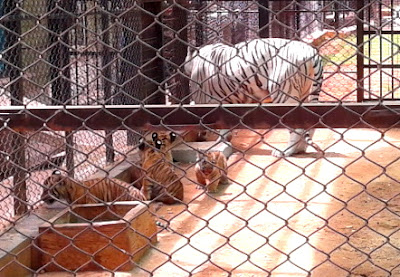 With the 2013 Dasara Mahotsava just around the corner, Mysore City is very proud to celebrate news on the arrival of 4 baby tiger cubs. To commemorate the World Tiger Day, the four little cubs –two males and two females –were for the first time allowed out for public viewing. The two month old cubs could be seen mischievously exploring their captive surroundings with a curious expression on their innocent face.

Many people had come to the zoo on the World Tiger Day, just to get a glimpse of these cute babies. Mr. B.P.Ravi, the executive director of Mysore Zoological Garden was also present among the bystanders. When enquired about the well being of the cubs and their mother Manya, an eight year old majestic White Tigress, Mr. Ravi was pleased to say that all of them are at the prime of their health and the cubs are adapting very well to the zoo environment. He even stated that when Manya and her cubs are inside their den, the footage of the cubs and their mother caught on CCTV camera present inside the den will be displayed outside on a television for public viewing during Dasara time. This will also be uploaded on their Website. 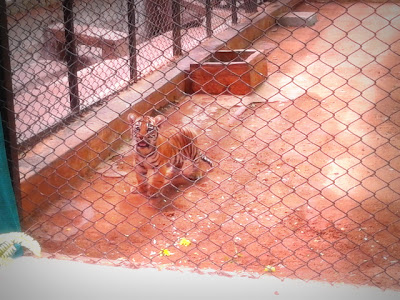 I was very happy to hear such positive news from Mr. Ravi, who is doing a very fine job as the director by uplifting the quality and maintenance of the zoo and its captive members. His promotion on the scientific implementation of gene manipulation and captive breeding in order to produce stronger and healthier cubs has become a success.

When compared to the zoo that I visited during my childhood days to the zoo which I visited today, there has been a marginal change in its surroundings. There is a neat order and discipline with which the zoo staffs carry out the day to day activities inside the zoo. The staffs are more prominent towards preventing people from teasing the animals and the ban on plastic use sure has made our Mysore zoo ever green!
Posted by Neha at 11:22 PM 6 comments:

Neha
Mysore/Bangalore, Karnataka, India
One fine day, it happened. I opened my eyes and there it was, so close to my reach... answers to my life, solutions to my future and a closure to my past.
And then the damn alarm woke me up!!

Thanks for stopping by!!